Aquamanda is both an accomplished DJ and a singer/songwriter. As a musical performer she has been mesmerizing many an intimate festival stage over the years (Big Chill, Glastonbury) and 90’s chill-out rooms (Fridge, Mass, Pendragon, Samsara) to low key local gigs inc Dulwich Festival, Dulwich Picture Gallery with her celestial voice, always enchanting the stage with her breezy seductive songs. Aquamanda has also taken to making video film clips of some tracks. From the trance dance “Beautiful”- bursting kaleidoscopic spectrum of spring flowers and the slower more sensual flowers in “Honey” to the autumnal landscapes in “Kiss the Wind” to the Twin Peaks/Hitchcock-esque “Now it’s Dark”> Always observing and engaging with the natural world around her. 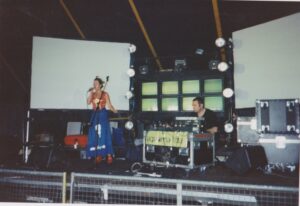 The albums here, feature songs old and new, drawn from personal experience, exposing an emotional Aquamanda very much with her own take on life. Songs of longing & intimacy, wonderment and angels, a need for space, a need for expressing love, to the euphoric vibrancy of freeing the spirit. The compilation Dark Side of the Room is at times heart wrenchingly sad… “we all have moments at the end of the day where we sit alone in the dark side of the room, where life catches up with us, where you try to hold on, carry on, and move on – it’s about picking up the pieces”.

Many tracks feature real instruments whilst embracing technology, with Amanda playing grand piano, autoharp & monochord (a 26 stringed instrument producing a drone and harmonics – as heard on “Kiss the wind”) or a string quartet swelling around that heavenly voice (“Angels”). Her craft of songwriting shines through this timeless collection of songs. 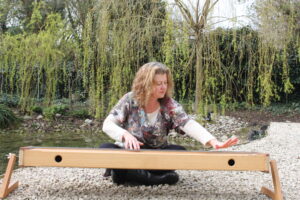 John Peel put her first release “Knees Up Mother Earth” (with Knights of The Occasional Table) in his Festive 50 calling it “a lovely record”. Amanda wrote all the hippy trippy lyrics and multi layered the spacey vocals in keeping with this iconic, electronic rare sell-out of an album.

Amanda met the Knights trio – Andy, Nyge and Steve (plus Matt Moose), after recording her track “Orion” with Colin and Neil (aka Zion Train) at their Wibbly wobbly World of Music studio in North London. This original version (1992) is now finally available on Spotify (2021). They suggested to the Knights, who were laying down their first tunes in the studio, that they could do with some lyrics and vocals and the first collaboration, hence “Breathe”, came to life and straight onto “Shamanarchy in the UK” compilation album. More inspired lyrics and vocals came to complete the Knights first album release, “Knees Up Mother Earth” in 1993

“Weightlessness” (heard here on Wonderland album) was quite possibly the first ever deliberately internet only release in 1996 via Cerberus Digital Jukebox in Soho, London. Pioneering musical streaming and downloads at the time was revolutionary and pre-napster and itunes, though few people had access to colour, visuals or sound on their computers never mind a secure way of paying for a transaction!

Aquamanda has released 12″ dance tracks on her own label Fairy Cake Universe. Here Amanda is in her own Cosmic Disco! Evidence of her scientific and intuitive thoughts on the universe are abundant. The joy of enlightenment through dance, love, stars, meditation, the elements, the interconnectedness of everything. (see Wonderweb video). With keen visual eye being a Fashion/textiles design graduate, she then went on to explore her natural abilities to work with energy Tama Do Academy of Sound, Colour & Movement Diploma with “the father of Vibrational healing”, Fabian Maman. Red gave her a headache. Magenta pink was her colour top to toe for a decade. Amanda interviews Fabian in her mini documentary “The Monochord”.

Amanda’s vocals have impressed and inspired other artists to collaborate and remix her tracks. 2011’s Rude Audio album That Dirty Echo has Aquamanda collaborating with this eclectic South London Collective. Many of which were further remixed for the 2012 Dirty Remixes EP. Tracks include: Now it’s Dark, Fin on a Hill, Fever Scientist, Lufbra Vigil, Rise in Peckham. Crystal Pylon 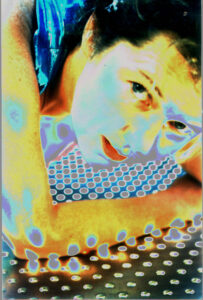 The ethereal vocals of Angels were sampled and dance remixed by Haris & Automatic (LAUS01). James Hare (aka Perception) chops and twists vocals originally from “Statue” to produce “Close my eyes” and “Oblivious”. FYI Amanda is also the vocals on Lenovo laptops advertising campaign throughout Asia.
Remix of Weightlessness, and keeping it in the family, due Summer 2021 by mr hare & mr hare.

When not creating her own music, Amanda can be found nestled amongst the soprano’s in local choirs, (JAGS, Note-orious, MIO) enjoying versions of contemporary pop songs in the EDT or in the courtyard of The Royal Academy for their Summer Exhibition openings. The other end of the scale and equally as enthusiastic, singing Verdi’s Requiem and Handel’s Messiah at Venues such as St John Smiths Square, Blackheath Halls, Southwark Cathedral, St Pauls Cathedral.

Like such joyous and sacred music, you get the sense that Amanda’s music connects to the source.

As DJ Aquamanda her versatile repertoire has delighted 8th’s to 80th’s (Brucie’s birthday/ Strictly Come Dancing wrap party at the BBC), charity Silent Disco at the Rivoli Ballroom, 40th’s at Soho House, 50th’s at Shoreditch House, Weddings and civil partnerships at Dulwich College to name but a few.

Amanda was the regular rollerdisco DJ (2011–2015) at the Saturday afternoon session FamilyJam. “It’s like the Chart Show on wheels”. www.rollerdisco.com

Aquamanda.biz was responsible for a decade sourcing and managing the smooth running of the stage award presentations href=”http://www.charityawards.co.uk” from presenters including Olivia Coleman to hosts including Jo Brand

Amanda is a local Legend and never does anything by halves. Every party would be an instant hit if we saw that Amanda was the DJ. She also writes music, sings and produces awesome videos and graphics so when Djing you get so much more because she cares, listens to your likes and knows a lot about music, with a fab playlist and is a wicked mixer of tracks

She was brilliant with requests, and had everything asked for from the obscure to floor fillers

She was definitely the icing on the cake at my 60th. She’s 10 out of 10 and a lot, lot more. Plus a wicked personality to match!

This DJ moves you through the gears and will have you addicted to dancing!!

Amanda reads the crowd brilliantly and just knows instinctively what to play next. You think they’re not going to dance. But they do dance!