Singer songwriter Amanda Greatorex starts the composing process with a lightbulb moment of a concept or story, explored initially through piano and voice. However, with the love of electronic based sounds (probably from love of 80’s electro to being a 90’s raver and DJ) mixed also with an array of other acoustic instruments – the monochord (used also for her sound mediation) and autoharp, these songs come to life. Club and radio airplay of the 90’s limited edition 12″ coloured vinyl dance & trance tracks were manufactured on her fairycakeuniverse label (nb name inspired by Douglas Adams & Trin Tragula) you can hear these tracks on Cosmic Disco CD. In this same era, you could have witnessed her many a late night cosmic swirling, mesmerising vocals as Aquamanda performing in South London club chill out rooms –  regularly at Pendragon, Escape from Samsara, Return to the Source, Megatripolis, then to UK festivals The Big Chill (Healing Fields) and Glastonbury (1997 Vibe Bar Tent).

In 1996 she released quite possibly the first ever, and deliberately internet only launched single, Weightlessness, (hear now on Wonderland CD) via Cerberus Digital Jukebox, as a comment on the future of a totally weightless non- physical sound product that could be spread purely digitally and globally through the ethers! This was a new concept at the time of course and the tech wasn’t available to very many – so was v tricky to actually download, listen, buy at that time.

During lockdown (2021) Mr Hare & Mr Hare were cajoled into creating a 25 yr anniversary remix in exchange for board and lodgings. Adding atmospheric nu-London jazz vibes.

With early collaborations with Knights of The Occasional Table – Knees up Mother Earth CD 1995, a John Peel loved album, Amanda added her unique take on life with lyrics and layered vocals celebrating the love of our planet, evolving life forms, guidance of angels to the tremble of the stars. (see Timeline reviews). Then followed a decade or so of low key recordings and local gigs, plus reverting to re-recording old piano diary songs working alongside (Seedpod, Quietman) producer engineer Larry Lush (Wonderland CD, Dark Side of the Room, Keys Open Heart Sings). Also contributing in a more minimal style, vocals with dubby tech tribe Rude Audio (from 2012)

As rare as spotting a Hare, Aquamanda has been known to perform acoustic Lockdown sets with oil projection backdrops from the comfort of her own bathroom to a global audience. facebook.com/aquamandamusic 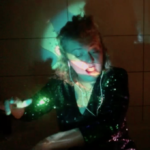 Lockdown live gig in the Bathroom 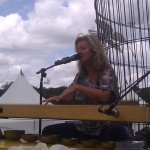 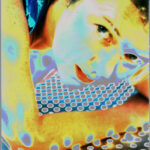 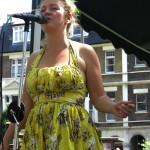